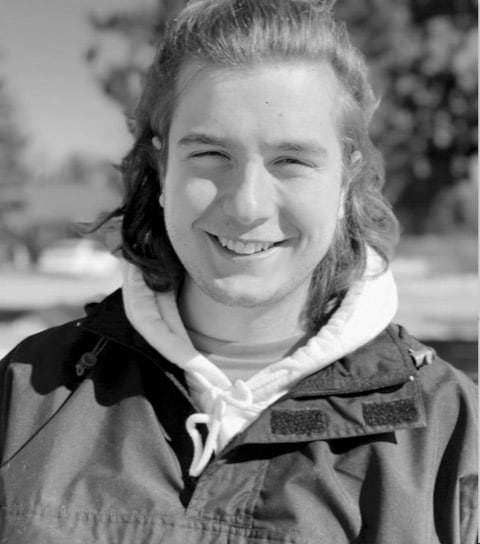 Jace wrapped his cloak tighter around his torso. Not for comfort, but to prevent the various weapons strapped to him from clanking against the armor. It didn’t matter really; the only people for miles were those accompanying him up the mountain. He doubted they noticed, much less even minded, as they were all doing their best to trudge along the treacherous path. Regardless of whether they noticed or not, Jace was not about to let himself become sloppy. He was following along the rear of the pack, a few paces behind the second to last. The party consisted of his master, Vaeling, and a group of six local Sherpas he had hired to accompany him through the Giant’s Maw. At least, that’s why they thought they were hired.

It wasn’t much longer until the party crested the mountain they had been hiking for the past few days. The weeks leading up to this had been exhausting. Long days of trudging through feet-deep, unbroken snow on paths that frequently consisted of nothing more than an eighteen-inch wide game trail. But they finally made it to the real destination. In the distance, just across one of the dozens of valleys separating the “teeth” in the Giant’s Maw, the party spotted it. A skeleton of titanic proportions—a relic of a long-forgotten age, where battles were fought by beings reminiscent of the Elder Gods. This titan had apparently lost its battle, as a sword nearly a league in length protruded from its torso, right where its heart would be if it were human. This is why Vaeling had dragged Jace and the village Sherpas all this way.

Vaeling ordered the hired hands to set up camp in a relatively spacious flat piece of mountain, much to their annoyance. As far as they knew, they were wasting a wonderful travel day. Aside from a wind, the weather was considerably better than it had been for days.

After half an hour, camp was complete and the Sherpas had retreated to the fire to play Mait’traan, a local card game. Vaeling had secluded himself to his tent as soon as it was up, and Jace went in after all of the other work had been completed. Vaeling was completely surrounded by ancient scrolls and tomes, strange pendants and ancient relics that seemed to whisper to you if you turned your back to them for too long.

“How much longer until you begin the ritual?” Jace asked.

“Jace, what have I told you about speaking to me,” Vaeling demanded.

“I would prefer the life of eternal suffering you’ve threatened as opposed to referring to you as master every time I address you,” remarked Jace.

“Yes, well, if I weren’t so busy with this I could see about fulfilling your request,” muttered Vaeling.

“Which brings me back to my original question, master. How much longer until you’re ready to begin? Because each moment we spend waiting is another moment for me to lament the work you’ve forced me to aid you with,” Jace said, his voice rising with each word.

“Mind your tone, boy. While this work is far more significant than you, I won’t tolerate your jibes indefinitely. I can always enslave another muscled goon with a sword. But if you must know, I’m already set to begin. We must simply wait for the sun to align with the skeleton’s head. I’m simply engaging myself in some side projects to pass the time,” replied Vaeling distractedly, already returning his attention to one particularly sinister looking tome.

Jace knew this conversation was over, so he retreated to his tent to try and grab some rest. To calm himself, he began to sharpen his dagger, purely for meditation, as all his weapons were already exceedingly lethal. Soon he drifted into a restless sleep.

As the sun started its descent across the pale sky, Jace felt a shift in the air. Not the wind changing, but something inexplicable, something primeval and sinister. He roused himself from his rest, and geared himself before exiting his tent. Vaeling was sitting at the edge of the cliff, eagerly watching the day slowly end, while clutching a box as though it contained his very being.

When he finally noticed Jace standing directly behind him, Vaeling rose, and started back for the center of camp. Once there, he started clearing everything out of a ten-foot circle.

Vaeling finished just as the sun was reaching the skeleton’s head. Slowly and deliberately, Vaeling snapped open the worn clasps of the chest, which burst open and began emitting an ominous gas, which oozed over the edges and started to form a dense fog that threatened to rise higher than Vaeling’s waist. Jace watched with anticipation as the sun crept ever closer to its destination.

Aside from his almost imperceptible muttering, Vaeling had been utterly still since he opened the box. But as the sun was halfway down the skull, Vaeling suddenly whipped his head up to gaze at the Sherpas, who had been watching him uneasily. He began loudly chanting in some ancient forgotten language; the words he spoke summoned chains from the fog which bound each Sherpa by their wrists, ankles, and necks. Terror swept across their faces as they struggled, but some arcane force prevented a scream from passing their lips. The invisible force which bound the men then began dragging the men and placing them around a circle inside the larger one Vaeling had cleared only moments before.

Jace could do nothing but watch this happen. He was bound to Vaeling as an undead servant, forbidden to do anything against his master’s wish. Every fiber in his being urged him to draw a sword and help the innocent men, but something stronger held him in place.

Once the men were placed equally around a circle, etchings began appearing in the stone, emitting a faint, ethereal glow. More shapes and intricate designs started carving themselves into the stone. After a few moments of this demonic carving, everything went still again. It was naught but a brief pause, as no sooner did it start than each man began getting sucked into the mountain itself. They struggled in vain, and Jace could hardly bear to watch as Vaeling sacrificed the lives of six so easily, all for his personal gain.

As the last man disappeared into the fog, Vaeling’s box began emitting a shriek. It grew louder and louder, its pitch ever rising, until Jace was sure his eardrums would burst. When it could apparently get no louder, a blur of shadow leapt from the box to the middle of the intricate weave that was created where the men were only minutes ago. After the shadow had been summoned, Vaeling ceased his chanting, and the fog slowly started receding back into the box.

Creatures appeared, seemingly created by the smoke. As soon as Jace thought he discerned a figure in the smoke, is would form something new, something even more horrendous. It turned to face Vaeling after a moment, and smiled.

“I am impressed with your talent, wicked one. It has been many millennia since I have been summoned, and many more since a mortal has completed such a task. While I do applaud you, I know you didn’t go through all of this effort for my praise alone. So I ask you, what do you require of me? Think hard before answering for I will grant only one request,” bellowed the demon in an unnaturally loud and commanding voice for one so small.

“Oh great Kebrachan, swallower of nations, scourge of purity, conqueror of realms, I have but one request that is humiliatingly easy for one with power as great as you. I wish for you to resurrect the titan Uthraain, King of Storms, who was slain behind us by the wretched angel Glyphus. I wish for you to resurrect him and give me control over him, so that I am his unquestioned master,” replied Vaeling

The demon smirked. “I see you’ve done you research and learned of my weakness to flattery. Very well. I shall do as you ask and be on my way. And since you amuse me mortal, I will offer some advice. Be careful how deep you delve into the mind of one so ancient and grand as Uthraain. Few have come out of such a place, and none who do retain any of their sanity.” said Kebrachan, with a frightening tinge of amusement as he uttered the final words.

Kebrachan began losing any sort of form he had retained when speaking to Vaeling and Jace. He began growing, expanding until he reached the edge of the circle which confined him. When he was as large as he could grow, he began glowing bright white, and emitting such powerful energy Jace had to turn away. What he saw astounded him.

The great skeleton was beginning to grow flesh onto its ancient bones. As it regenerated, it grabbed the mighty sword with both hands and removed it from both its chest and the mountain behind. The resulting sound was deafening, even from so many miles. As it began to form near fully, it stood, leaning heavily on the sword for a time. After what seemed like less than a minute, Jace was staring at something far more primitive, yet far more refined than man. He was staring at a titan.

“Now Jace,” Vaeling said with a terrifying look of hunger on his face. “Now we can begin.”