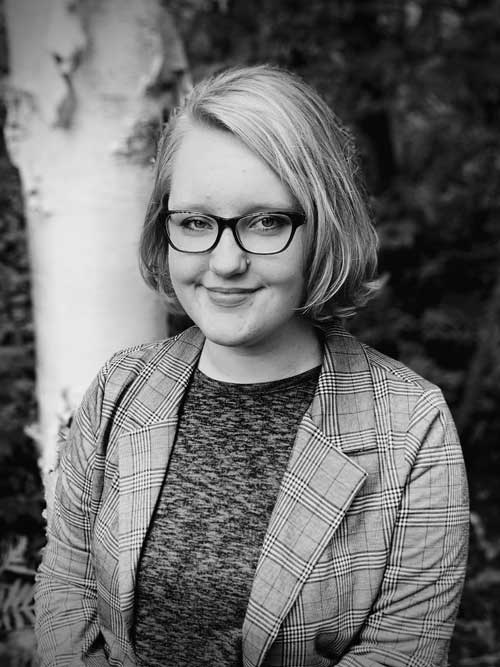 Winter rolls around in fragments: a first bite of genuine cold, a wet, gray snowfall. Slush turning ice turning black ice. It’s November and everything is white. When this winter rolls around, Fernanda takes out her soccer cleats and crunches her way to class. Bundled in a red wool coat lined with faux fur and embroidery along the hem (very Nordic, almost comical), she toddles down frosted stairs, through halls with club posters plastered to their brick walls.

When her mother calls midway through her 18th Century in Central Europe class to say that her grandmother wants to go for a drive later, she leaves to soundlessly cry in the hall. The professor is forgiving.

Winter rolls around in fragments: a first kiss at Melanie Cottontail’s Halloween party, slipping on the campus promenade. Slush turning ice turning slush once again. It’s October and everything is dying. When this unwinter rolls around, Fernanda stows away her fall boots and orange knit sweaters, wears white instead. Swaddled in an extra-large leather jacket from her father, she clambers down frosted stairs, through blank halls with nothing yet plastered to their brick walls.

When her mother calls to tell her midway through her 18th Century in Central Europe class that her grandmother doesn’t like the cold anymore, she leaves. The professor is forgiving.

Winter rolls around in fragments: a first failing grade from Dr. Wright, a last glimpse of what was summer-autumn as she leaves home for college. Leaves turning gold turning chocolate bronze. It’s August and everything is still clinging to life. When this unwinter rolls around, Fernanda unpacks her belongings from break-down boxes, carefully unwrapping the newspaper swaddles of her Sea World snowglobe and other breakables. Enveloped in orange knit sweaters, she saunters down gray-stoned stairs, through bustling halls with Welcome New Students! posters plastered to their brick walls.

When her mother calls to tell her midway through the 18th Century in Central Europe to say that her grandmother thinks that it’s time to head back home, she collapses in class. The professor is forgiving. Fernanda comes to in a lecture hall full of whispering, bug-eyed undergrads. A red beard asks her if she’s eaten breakfast and offers her a Cliff bar. She cries in answer. Hot tears pool into her hands like deconstructed snowflakes, like snowglobe glitter, winter slush, the space between notes in “God Only Kn––

Winter rolls around in fragments: a first––pause.

In this moment, a new memory crumbles back into itself. Fernanda receives her acceptance letter in April and visits her grandparents several weeks later. Modena is a beautiful place to be in summer. They take her out to cafés and hole-in-the-wall Italian restaurants with thin, handsome waiters. Before supper one evening they wander through the Mercato Albinelli, sampling prosciutto, ricotta, tangerines. Crates of apples, tomatoes, squash, walnuts, and dark plums greet them at every turn of the market, a vendor with a smiling, tanned face welcoming them with a warm buon giorno! They split a bottle of grappa, passing it between them as they walk out into the street, past yellow bicycles and young, perfect women chattering like squirrels in rapid Italian.

At one point, her grandfather points out Forno Rafaella, a bakery on the corner where he used to work in the sixties, and regales them with stories of angry, icing-mustached customers, an entirely new flavor of birthday cake he invented with his best friend, Vincenzo (which he refused to tell the two women), how he’d bike to and from home every day at five in the morning and return to Maria late in the evening after the last loaf was baked for tomorrow’s selection. On particularly late nights, Nonno would bring her stolen flowers from hotel window boxes, stuffing the bouquets into the back of his trousers, flush against his back, as he rode down dimly lit cobblestone streets.

Fernanda smiles and hugs her grandmother who’d grown teary-eyed and smacked her husband’s arm, muttering a small buffone under her breath. The elderly Italian only smiles back, links his arm in hers, and whispers a soft anche io vi amo as they walk on. Fernanda closes her eyes, squeezes her nonna’s hand in hers. She marvels at its warmth, but it doesn’t last long. Soon a red warmth is bleeding down between her fingers, clasped between their hands.

Warmth is the glass peppering her grandmother’s body in the After where it lies lifeless––freckled with blood––in the snow. When her eyes open, the image disappears, quick and sudden. Modena slips into gray. Her grandfather gives her a grim Mona Lisa smile and tells her a story about Forno Rafaella, flowers, Maria. Silly polpetto, were you even listening?

Winter is a state of being in this in-between place suspending her between shards of glass and glitter. She rolls around in it until that summer slows, rewinds, picks up, flashes through spring, through other winters, through time spent studying over high school nonsense and sweat-polished conversation with her first love, soccer fields, Sea World, a different visit to Modena, her driver’s test, after.

Fernanda brings her hands to her head, tearing through her sun-lightened hair. The memory rolls around in fragments––black ice, a damning phone call, a scream or two, glass pockmarking the snow lining the road. The steering wheel is here between her sloppy notes in this classroom in the 18th Century in Central Europe; it’s here in Sea World, where dolphins dive through a worn leather hoop; it’s here in Modena, served to her al dente in a shallow bowl with marinara and fresh Parmigiano; it’s here, alive in her grandmother’s cold hands as she reaches over her lap to take control of the station wagon, then, beautifully, ripped away.

Winter rolls around in fragments: a first drive along the shoreline, a day with Nonna while her grandfather shares supper with old friends two hours away in Minneapolis on their trip’s last weekend in the States. Slush turning ice turning black ice. It’s December and everything is dead. When this winter rolls around, Nonna asks a sixteen-year-old Fernanda to take her for a drive to see the snow-ridden landscape of the lakeshore, a rare treat for her. Fernanda accepts, lends her grandmother a plaid coat, and they set out, taking her father’s station wagon. They drive down frosted roads, through blank tunnels with nothing yet graffitied on their brick walls.

At one point, Fernanda tells her grandmother to open the glovebox to reveal a snowglobe with Minnesotan wolves racing through trees on the hand-painted base. Something to remember, a gift. Nonna leans over the center console and kisses her granddaughter’s cheek. “God Only Knows” plays through the grainy car speakers and they sing along, smiling off-key. God only knows what I’d be without you . . .

When her mother calls to tell them Nonno won’t be home until tomorrow morning because of the icy roadways and begs them to turn back, that a newly licensed driver shouldn’t be driving in such dangerous conditions, Fernanda hesitates. The ice does not forgive this.

And she watches, helplessly, as the wheels commit themselves.