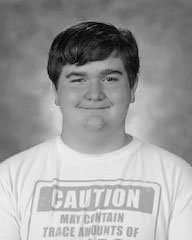 When my brother Sean and I had first moved into our family’s new apartment in Lake Ann, Michigan, it was hot. So unbearably hot. We’d just come back from a boy scout summer camp, complete with horrible plumbing, humid outdoor tents, and enough bug bites on every square inch of our skin to draw constellations. Needless to say, we were at the peak of discomfort.

Our parents and two younger siblings were already stationed at the house long before that day. They’d been setting up the entire house for at least a month in advance. The apartment was relatively small, so moving everything from our spacious property back in Swartz Creek into this second-story building would prove a daunting task: one I would be glad not to participate in. Still, It didn’t feel right not setting up our rooms. At some point I thought that maybe the new house would be a pleasant surprise, or at least something to fill in the gap of the old one. Something that when the curtains were pulled, I could say “Oh, Gosh I never would have thought!”. That was the hope, at least.

The first settlers of Lake Ann (also known as Almira Township) were named John and Alec Heather, who came down in 1862. However, no one built a single building until later that year, when settlers Andrew and Almiral Burrell built a house near the northern edge of Sancrainte Creek, a place somewhat northwest of Lake Ann known generally by the name “Sancrainte Hill”. They would be the first in many to build the foundations of what would be Almira Township.

Dad had moved to northern Michigan around September of 2014, a year before our arrival. He took some bare necessities, a few keepsakes, and a good portion of the packed-up luggage. He would start working at the job he’d managed to get: a head chef position at a Baptist summer camp. The rest of my family and I stayed back in Swartz Creek, continuing the packing process while my Dad made the new house livable.

I remember becoming a second father to my family, stepping in to help when Mom had trouble filling the role of two parents. Afterschool, I would clean the house the best I could. I would read a story to my brothers, tuck them in if I remembered. And I knew it wasn’t Dad’s fault. This was just how transition worked. We would sometimes Skype Dad, crowding on our parents’ bed around the one laptop in the house, watching him laugh at us as we reenacted any scene we could think of: pirates sword fighting with pillows; Darth Vader killing Obi-Wan, Obi then hiding under a blanket as his robe hits the mattress; TV salesman attempting to sell spray-on Cheez Whiz. Part of it was trying to cope with the distance. The other part was just to fill that gap. The one that, for young boys, can’t be filled by anything except a father. Maybe it worked?

Still, it was a long year.

The first, most disastrous fire in Lake Ann History erupted on the 4th of July, 1897. The fire destroyed over 88 buildings, the town’s main depot, almost 2640 feet of railroad track, and a mass of homes too many to count. Almira Township’s firefighting force was not enough to combat the heat, and nearby Traverse City had to be telegraphed for reinforcements. The fire started in the engine room of Habbler Sawmill, belonging to one William Habbler. The mill was one of the most prominent sources of income for Lake Ann, so at least there was some irony to hold onto.

Many people died. Lake Ann’s population before the fire was around 1000. After, in the low hundreds. Charcoal bodies dotted Almira, to be cleaned up in the aftermath (though they never found all). Large amounts of the scars Almira endured never were repaired. Blackened supports were nailed together with wooden beams. Scorched walls were merely painted over. The shadows left behind by buildings and people would not fade.

The day we were finally all together in a new house, when we all stood around a white plastic table baked in heat, it was the 4th of July, 2015. We had settled in as best as we could, though every room was incredibly small. The apartment was a second story addition to a historic building that had been around for several centuries. By the time we moved in it had already been long since converted into a party store.

My parents had not intended to have us there during the 4th of July, but some God-ordained force allowed it to happen, I guess. The city next to us, Traverse City, was hosting a festival known as the Cherry Festival. This festival was held every year from June 29th to July 6th, July 4th being an obvious summit of events. There were attractions that kept the festival busy: live bands, hot food, carnival rides, etc. The problem was, they all cost money. Having recently moved into a new house, cash was a little tight. So the only real reason Mom brought this festival up was for the one event familiar enough to settle us in: the 4th of July fireworks.

Our family typically has a hard time getting all six members into the car in a timely fashion. Because we had nothing to do, however, we were perfectly fine with rushing all at once down the creaky set of white wooden stairs. We ran down the stairs in one group, shaking the shoddy steps so hard it seemed they would collapse. We piled into Dad’s black SUV, which had been baking outside under the blaring sun for hours on end. We didn’t seem to mind.

The second fire started during 1914, the same as the first. William Habbler had purchased a second mill father northeast from Almira, promptly after the last fire had taken place. This was presumably an attempt on Habbler’s part to avoid starting another town-razing fire. Sadly, it did not follow through. The fire in part grazed over some of Habbler’s unfixed damage, merely finishing the job. The rest of the fire destroyed Lake Ann’s business district, which had already been decreased with the last fire. Once again, the repairs were flimsy and lacking. Even though the fire took significantly fewer lives, it still was no less harsh, and many of those businesses suffered further from poor structural integrity, some threatening collapse.

Before the fireworks, our busy bodies needed fuel to burn. So we decided to travel to a bar and grill, somewhere close to the outskirts of Traverse City. Walking in, the place was surprisingly packed for an “outskirts” kind of place. I can’t remember what I ordered, but it wasn’t of importance. One of my younger brothers, not concerned enough to decide his meal, resorted to drawing on his kid’s menu with some crayons. Halfway during the meal, he was aggressively filling in some large drawing with a red crayon, when he pushed too hard and the crayon snapped.

My brother was not sad: he was old enough that random accidents didn’t make him cry. Still, he whined to Mom about his crayon crisis. She told him to just use the blue one instead. My brother, upset, wanted the waitress. Our parents were understandably against the idea: it was a busy night, and the waitress wasn’t even on our side of the restaurant. My brother fussed pestered his point across, but we eventually got him to calm down. It took almost forty-five minutes for the waitress to come back. By the time she did, my brother had completely forgotten, resorting to wrapping the two rosy crayon halves in paper napkin. He didn’t care. When we eventually paid and left, we switched the cool interior for a hotter environment. After we left, we started walking to where the fireworks would show. It was as hot outside as that morning had been, and I was hoping that the large dinner I had just eaten wouldn’t be making a guest star appearance in the night’s fireworks display.

The third fire and last fire in 1918 was probably the most forgiving. In total, it only managed to cover less than half of Lake Ann, which excludes the previously burnt business district. This fire burnt down the prominent Congregational Church, leveled several nearby homes, and (for the third time) completely ruined William Habbler’s Sawmill. The firefighters of Almira alone were able to put out the flames alone, but the damage to the church and the mill had already been done. They never got rebuilt to what they were.

The fireworks were going to be starting in a few minutes, and we had completed our long walk through town. It had been an exhausting trip, but I had tipped a jazz musician playing beautifully on the street, so I felt content. As we came upon the beachfront, we passed another man: this time, on the ground with two officers. The man was incredibly hammered, one officer at his side while another in a neon green safety vest was talking over a radio. Some people there were drinking; some of them, even drunk.

I started to speculate, something my brain decides to do at the worst possible moments. I speculated that the man might be an angry drunk. Maybe he would get up at any moment and knock the two officers flat. Maybe he would run into the crowd and start hitting people, hitting me. It may have been because of the newness of the situation, or how unfamiliar this place was. I started thinking up strange situations, things only feasible to a stressed and tired mind. I pictured the fireworks coming at us and singing the beach, set explosives blowing up certain parts of the shore, making people run all over. My mind was in a perpetual blur.

And in an instant, a bright red light shot up into the sky, followed by a sharp boom.

The third fire came from the residence of Alex Frazer. More specifically, from Alex’s defective chimney. That night, he must have set a large fire. A strong wind heading northwest caught a hold of some embers. Carrying those embers, the wind ran along many of Almira’s resident’s houses, catching aflame every roof it touched. The fires produced there created more embers which got carried away to create more flames. Eventually, the fire caught on the Congregational Church, and it took its full form. It was truly horrifying. It was fascinating. A brilliant part in mother nature’s final raid on the town.

Each and every explosion left me in awe, each color within a color, each yelling burst of chemicals. I was watching the night sky come alive. And most importantly, I stopped thinking. Nothing was about people, or weapons, or hiding from killers. Everything was about what I was straining my neck so hard to see. Whatever it was about the fireworks, it did its job. And I’m glad it worked.

That night, something distinct happened in my brain I can only vaguely remember. Because the apartment was small, we had to double up two brothers in each bedroom. I was stuck in a poorly-inflated air mattress with Sean. The room was humid, the fan provided no cooling, we were both sweating in the summer air, and the scene began to look and feel a lot like it did at the beginning of the day. Yet somehow, my eye caught on the nighttime stars outside. I thought back to the fireworks, and my mind began to wonder in the way that it does. I thought of how hot fireworks get when the explode. I thought about how they even make fireworks, and what happens to the cardboard after you set one off. And even though the room was so unbearably hot, my 13-year-old mind slowly drifted away….