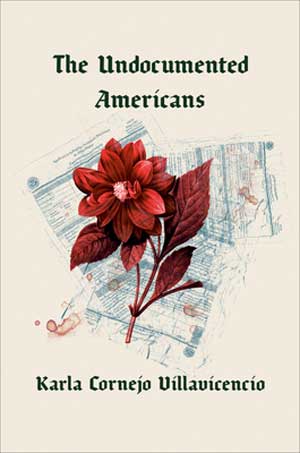 With the publication of her debut book, The Undocumented Americans, Karla Cornejo Villavicencio  became the first undocumented finalist for a National Book Award. Her book was also named by Barack Obama as one of his favorite books of 2020 and was long listed for the Porchlight Business Book Award. The Undocumented Americans was selected as one of the best books of the year by The New York Times Book Review, Time, NPR, The New York Public Library, Book Riot and the Library Journal. It was also named one of the ten best books of the year by Vulture. Karla has written about immigration, music, beauty, and mental illness for The New York Times, The Atlantic, The New Republic, Glamour, Elle, Vogue, n+1, and The New Inquiry, among others. She lives in New Haven with her partner and their dog. She is a graduate of Harvard University and a doctoral candidate in the American Studies program at Yale. She was an Emerson Collective fellow.

Karla has read a vast amount of books about immigrant life in America and has hated almost all of them. She could not see herself or her friends in the sad, “pull yourself up by the bootstraps” memoirs that permeated much of the existing literature. In her searing debut, The Undocumented Americans, Karla seeks to tell stories that more closely resemble her own. As one of the first undocumented immigrants to graduate from Harvard, she reveals the hidden lives of her fellow undocumented Americans in this groundbreaking portrait of a nation in The Undocumented Americans, a finalist for the National Book Award. Using a combination of reporting and personal memoir, Karla traveled the country at the risk of arrest and deportation to tell of the interior, hidden lives of undocumented immigrants in the United States. Looking well beyond the flashpoints of the border or the activism of the Dreamers, Cornejo Villavicencio explores the lives of the undocumented as rarely seen in our daily headlines. In New York we meet the undocumented workers who were recruited in the federally funded Ground Zero cleanup after 9/11. In Miami we enter the hidden botanicas, which offer witchcraft and homeopathy to those whose status blocks them from any other healthcare options. In Flint, Michigan, we witness how many live in fear as the government issues raids at grocery stores and demands identification before offering life-saving clean water. Karla writes, “What I saw in Flint was a microcosm of the way the government treats the undocumented everywhere, making the conditions in this country as deadly and toxic and inhumane as possible so that we will self-deport. What I saw in Flint was what I had seen everywhere else, what I had felt in my own poisoned blood and bones. Being killed softly, silently, and with impunity.”