Author of five New York Times best-selling books, John U. Bacon knows how to spin a tale. His newest book is The Great Halifax Explosion—the startling history of the Mont-Blanc, a World War I munitions ship carrying 3,000 tons of explosives. In 1917, it exploded in the waters of Halifax, Nova Scotia, killing and wounding thousands.

of one of the world’s deadliest explosions

John U. Bacon is many things: a journalist, a public speaker, a sports writer and commentator, and an educator at the University of Michigan. He is also, he says, “an average hockey player, a mediocre Spanish speaker, and a poor piano player.” But above all, Bacon is a storyteller of enormous talent.

The author of five New York Times bestselling books including Three and Out, Fourth and Long, and Endzone, Bacon knows how to turn pages and a phrase. He brings to life startling history, employing a jeweler’s eye for detail and the touch of a true humanitarian.

In his latest book, The Great Halifax Explosion, Bacon recounts the story of Mont-Blanc, a munitions ship carrying 3,000 tons of TNT and other explosives. In 1917, this cargo would create the largest man-made explosion the world would see until the U.S. bombings of Hiroshima and Nagasaki during World War II.

Drawing on human accounts and historical records, Bacon masterfully stitches together the calamitous accidents, decisions, and coincidences that would lead to a harrowing disaster that wounded 9,000 people, took nearly 2,000 lives, shocked multitudes, and dominated news headlines around the world. 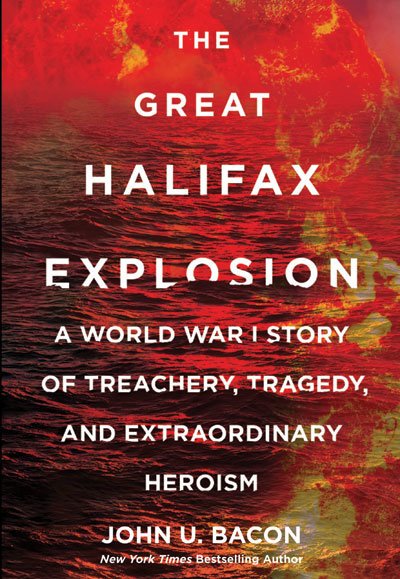