EVENT RECAP
Founding Fathers to Feminism:
A Recap of An Evening in Conversation with Rita Mae Brown
by Jacob Wheeler

To hear Rita Mae Brown speak is to journey through the American landscape, from the lofty language of Thomas Jefferson to the great radical struggles of the 20th century, to a farm in the Blue Ridge Mountains. Along the way, you’ll lament our missteps and the misinterpretations of history, but find joy in the present and optimism for the future. 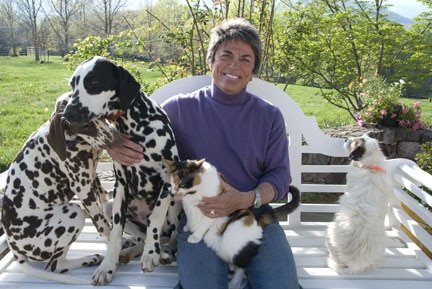 Brown visited the National Writers Series in Traverse City on November 6, just days after the release of her latest book Let Sleeping Dogs Lie, a gripping mystery that features the irrepressible “Sister” Jane Arnold and the wily antics of her four-legged friends. Brown, a New York Times bestselling author of the Mrs. Murphy mystery series (which she writes with her tiger cat, Sneaky Pie) has also published countless novels, essays, screenplays, poetry, cookbooks and a memoir.

The Northern Michigan audience was lucky to catch her, for Brown doesn’t venture out much from her home in Afton, Virginia, which she shares with cats, hounds and horses. According to a 2010 Wall Street Journal article, “…she rarely leaves her farm, preferring to socialize…on her back patio, drink Coca-Cola and watch the sun set behind the Blue Ridge Mountains.”

A conversation with Rita Mae Brown, like a great mystery, could unfold in many different ways. Guest host Rich Fahle chose to ask Brown about animals first, then humans. Brown rises at 5 a.m., feeds the hounds and works them and her horses. In the heat of summer, she writes after this. Her words are frequently inspired by the animals, with whom early humans have shared a symbiotic bond for millennia.

“I’m convinced that language developed from hunting,” Brown told Fahle. “You have to be able to communicate. The first common cause we made was that animals were a smaller prey than we are. So we made a social contract. You do this for me, and I’ll do this for you. This is our oldest deal, and we need to honor it.”

Our language, Brown added, greatly informs our culture, our history, and our politics. “Latin is worth learning, to understand who we are and what our language is,” she said. “Language preceded us in this world. You think you speak English, but English speaks you.” Greek, she added, was spoken by the ancient philosophers, and it birthed democracy.

“Democracy started with western language, shouldn’t we be proud of it?” And yet, we’ve lost track of what our language, our great books and our civilization means, she offered. Young men radically interpret Islam and travel to Syria to join ISIS, but “how are we going to fight them if we don’t know what we’re about?”

“It’s there in the Iliad, the first great antiwar book of literature,” said Brown. “You were taught the wrong one. Read the Iliad again. It’s not a celebration of war, but the opposite.”

Brown’s appearance in Traverse City meandered through political criticism, both ancient and contemporary. “People are always trying to take things away from you, including the President,” she said, joking, two days after the midterm election, that “the difference between the Republican and Democratic parties is the difference between getting syphilis or gonorrhea!”

Rita Mae Brown’s own politics are deeply interwoven with American movements of the past 150 years. In the 1960s she was active in many key causes including civil rights, the Vietnam War, Gay Liberation and feminism. She ran, for a time, with feminist leaders Gloria Steinem and Betty Friedan in the National Organization for Women, but is said to have angrily resigned in 1970 because of its homophobia. Brown told TIME in 2008 that she didn’t resign, “They threw me out.” She protested the exclusion of lesbians from the women’s movement, and helped establish the Furies Collective, a lesbian feminist newspaper group.

“I came from a completely different world than these people,” Brown said in Traverse City. “I like them and respect them. They’ve created a great world for themselves, but not for blacks or Hispanics. And not for the one out of 11 children in Virginia who live on the street. …I wanted to start halfway houses. They’re lawyers, they didn’t want that. They wanted to write papers.”

Brown’s political awakening began with her mother, who marched for women to gain the right to vote. “My mom told me ‘generations of women have marched for this, you’re going to vote!’ I learned a lot from my mother.” Brown would later date tennis star Martina Navratilova (one of the first sports icons to come out of the closet).

The activist in Brown takes a critical view of gender identity politics. Asked by Fahle if “gender is the last frontier” she responded, “I think gender is the last trip. You spend all that time proving your gender? You’re wasting your time. …I don’t care what you are, or who you are, you’re perfect!”

“Why are you making the cosmetic industry billions of dollars? But I understand why women do it, because men fall in love with their eyes”

Men remain afraid of women gaining too much power, maintained Brown, joking, “It takes too much energy to control us. Men can’t control women anyway. How many men can control their own wives?”

Ironic though it may seem in the current political construct, Brown the radical gay-rights feminist is also deeply in love with the Deep South, and its will to cling to its history and culture. “The South is a stage that’s been unchanged since 1607,” she said. “It’s easier to write a novel set in the South than it is to do so in Seattle or Traverse City” because these northern settings have changed so drastically in just a few decades, or centuries.

Brown is as likely to quote founding father Thomas Jefferson, one of Virginia’s most famous sons, as she is to quote later revolutionaries such as Marx or Dr. Martin Luther King. After her National Writers Series appearance, over dinner at Amical, the Virginia lover waxed poetic about the South, her view of the Blue Ridge Mountains, and honoring tradition, culture and language. The cataclysmic Civil War ended nearly 150 years ago, and yet authors such as Harper Lee and Charles Frazier (and William Faulkner before them) have kept the language of the South alive. Brown seemed to imply that, here in the industrial urbanized north, where we erase and rewrite our landscape over and over again like a blackboard, our language has paid the price.

A history lover though she may be, Brown cautioned not to resent today or tomorrow. “I love history, but people are always fretting about the future,” she offered, with more than a hint of carpe diem (Latin for “seize the day”). “I say live now. Every bad thing you think will happen probably will, so don’t worry about it! …To me life is a big frolic. Do it now, you’re going to be dead a long time.”

Fahle asked Brown about the impact she’s had. The author and activist shook off the question.

“People get emotional and say I saved their life. I didn’t save their life, I just opened the door. They walked through it. …Maybe there’s some kid in the middle of Michigan who’s gay or is a man trapped in woman’s body. If you give them just a little hope, they’ll get through it.”

“If you can’t find anything else, revolt! Remember, we revolted against a legitimate power (during the Revolutionary War). It’s actually quite American to take to the streets. Jefferson said, ‘The tree of liberty must be refreshed from time to time with the blood of patriots and tyrants’.”

More about Rita Mae Brown
Rita Mae Brown is the New York Times bestselling author of the Mrs. Murphy mystery series (which she writes with her tiger cat, Sneaky Pie), the Sister Jane foxhunting mysteries, and the acclaimed classic and mega-bestselling Rubyfruit Jungle. She is an Emmy-nominated screenwriter and a poet who has published countless novels, essays, screenplays, poetry, cookbooks, a memoir, and most famously, mysteries. 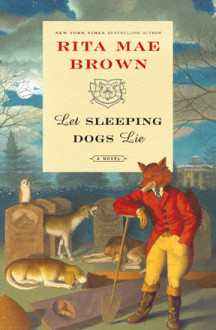 Brown is in enormous demand as a speaker and guest artist, but she makes few appearances. According to a 2010 Wall Street Journal article, “…she rarely leaves her farm, preferring to socialize…on her back patio, drink Coca-Cola and watch the sun set behind the Blue Ridge Mountains.”  Her NWS visit is a rare chance to meet a literary icon.

Critically acclaimed when first published in 1973, Brown’s Rubyfruit Jungle has only grown in reputation as it has reached new generations of readers. The novel is the first milestone in an extraordinary career, which has firmly established Brown as one of the country’s most distinctive writers.

In the late 1960s, Brown turned her attention to politics. She became active in many key causes, including civil rights, the Vietnam War, Gay Liberation and feminism. An early worker in the National Organization for Women, Brown is said to have angrily resigned in January 1970 because of its homophobia. In an interview with TIME in 2008, Brown said she didn’t resign, “They threw me out.” She fought back protesting the exclusion of lesbians from the women’s movement. She also helped establish the Furies Collective, a lesbian feminist newspaper group.

Brown has published nearly a book a year since the 1970s and has generated a daunting body of work. Her murder mysteries have topped the bestseller lists, and her ideas and scripts have been made into films and television shows. She worked with Norman Lear on several TV shows, winning an Emmy. She even became a tabloid star during her three-year relationship with tennis superstar Martina Navratilova.

Brown holds doctorate degrees in literature and political science. She lives in Afton, Virginia, with cats, hounds and horses.

More About Guest Host Rich Fahle
Guest host Rich Fahle, Executive Producer of The Miami Book Fair International, founder and CEO of Astral Road Author Media and Bibliostar.TV – entertainment for readers, including interviews, discussions, live events, and other special features about books, authors, and the reading life. Fahle draws on his extensive background as a marketing agent for authors, publishers, and book retailers in the emerging digital marketplace.

Before launching Astral Road in 2010, Fahle served as Vice President, Digital Content, E-Commerce and Entertainment at Borders. In that role, he was a key driver of dynamic brand extensions into new media fields, broadening the scope and reach of customer relationships within the book, music and movie retail space. Examples include the development and launch of Borders’ social media platform on Facebook, Twitter, YouTube and other sites, as well as creating the Borders Media online video entertainment network, one of the first major branded content initiatives on the Web. Other roles included leadership of the creative and production teams, the in-store national events program, national advertising and brand development, and e-commerce operations.

NWS is partnering for this event with AC PAW, a nonprofit animal rescue serving Northern Michigan. Event patrons are invited to bring gifts to benefit AC PAW. A wish list of items can be found on the AC PAW Facebook page