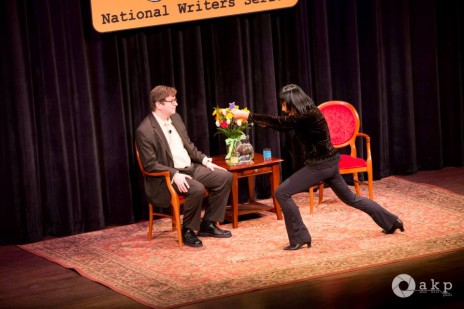 Anchee Min laughed when she told a National Writers Series audience about her wedding night, when she married Lloyd Lofthouse, an author and former U.S. Marine and Vietnam veteran. “I hope I don’t have flashbacks,” Lofthouse confided in his new bride. “I should have told him, ‘I hope I don’t have flashbacks,'” Anchee joked to a packed crowd in Traverse City, Michigan, as she stood on stage and mimicked the act of bayoneting an American soldier.

Anchee, a native of Shanghai, was indoctrinated as a young girl by the teachings of Mao Zedong, the father of China’s Communist revolution. At age 17 she was sent to a collective farm where she worked and learned to search the rural rice paddies for invading American soldiers (and bayonet them). But she didn’t find the enemy, she joked, only fellow comrades making out.

While at the collective farm, Anchee was discovered by talent scouts looking to capitalize on her model good looks to promote Maoist ideology, and she worked as an actress at the Shanghai Film Studio until fellow actress Joan Chen helped her immigrate to the United States in 1984. Anchee came to attend the Art Institute of Chicago, penniless and without speaking a single word of English upon arrival.

The Cooked Seed, which NPR called “the ultimate immigrant story” recounts Anchee’s struggle, and eventual triumph, in her adopted country. She taught herself English by watching the PBS children’s shows “Sesame Street” and “Mister Rogers’ Neighborhood.” She kept herself afloat by working five jobs at once, slept in unheated rooms in desolate neighborhoods, married badly to keep her visa from expiring and then divorced, and raised her daughter, Lauryann, as a single mother. The Cooked Seed is an immigrant story that illuminates what many of us take for granted. In the memoir, Anchee is also not afraid to criticize the United States and American culture. As she told guest host Ron Hogan, The Cooked Seed is also about raising her daughter amidst American consumerism and trying to keep Lauryann’s eyes open to Chinese tradition.

“In China, we were told ‘people suffered so you can eat,'” Anchee joked. “In America, we’re told ‘finish food on your plate, because people in China don’t have food.'”

Hogan briefly recounted Anchee’s family history and how they faired under China’s Cultural Revolution, how Anchee was indoctrinated and encouraged to denounce her favorite teacher for criticizing the government, and how she was sent from Shanghai to the rural labor camp and taught bayonet warfare under the Red Guard movement. Anchee repeatedly turned the interview into a theater performance. She took to her feet and demonstrated how she was taught to stab the first American soldier she encountered, then remove the blade and hit the second one with the butt of her rifle. “We’d do that over and over again until the process was smooth,” she said.

However, Anchee’s family fell out with the Communist Party. Her father was an astronomer who talked of spots on the sun. Since Chairman Mao was considered to be the sun, itself, her father was perceived to claim that Mao had spots on his face, and thus considered anti-Mao.

Anchee Min’s National Writers Series appearance quickly took on a humorous tone. She joked about the sexual repression in the labor camp and how she and other girls were given no sex education. Nevertheless, intercourse between a man and a woman was considered the highest revolutionary act.

At one point, Anchee departed from Hogan’s questions and stood up to sing a lovely, melancholy song in Chinese about a girl pining for her lost love. Later in the program, she offered  a poem, also in Chinese, that included beautiful imagery about snowy cliffs and blossoms in the spring. And just before taking questions from the audience, Anchee sang a series of popular musical hits, ranging from songs of Shanghai to “Don’t Cry For Me Argentina” before leaving the stage to jubilant applause.

Peppered with audience questions about her books, her journey, and if she encountered resistance from her publisher for criticizing American culture, Anchee continued to use humor as the sharpest instrument in her toolbox.

Since young people in China today didn’t grow up with the Cultural Revolution, how do their parents relate to them, she was asked.

“Well, kids there basically tell their parents to ‘eff off,'” just like they do here,” Anchee answered.

Anchee Min was born in Shanghai in 1957. At seventeen she was sent to a labor collective, where a talent scout for Madame Mao’s Shanghai Film Studio recruited her to work as a movie actress. She moved to the United States in 1984. Her first memoir, Red Azalea, was an international bestseller, published in twenty-seven countries. She has since published six novels, including Empress Orchid, Becoming Madame Mao, and, most recently, Pearl of China. 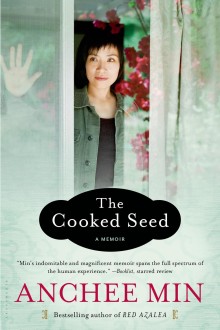 It’s been 20 years since Anchee Min made her literary debut with Red Azalea, her acclaimed memoir of growing up in China during the violent trauma of the Cultural Revolution. Two decades later her follow-up memoir, The Cooked Seed, picks up where Red Azalea left off. She arrives in America in 1984 with $500 in her pocket, no English and a plan to study art in Chicago. Min teaches herself English by watching Sesame Street, keeps herself afloat working five jobs at once, lives in unheated rooms, suffers rape, collapses from exhaustion, marries poorly and divorces. But she also gives birth to her daughter, Lauryann, who will inspire her and finally root her in her new country.

Min’s eventual successes – her writing career, a daughter at Stanford, a second husband she loves – are remarkable, but it is her struggle throughout toward genuine selfhood that elevates this dramatic, classic immigrant story to something powerfully universal.

Min’s writing has been praised for its raw, sharp language and historical accuracy. Min credits the English language with giving her a means to express herself, arming her with the voice and vocabulary to write about growing up during China’s Cultural Revolution. “There was no way for me to describe those experiences or talk about those feelings in Chinese,” she has said of a language too burdened by Maoist rhetoric. Today, she writes candidly about events she was once encouraged to bury. The New York Times has called her “a wild, passionate and fearless American writer.” 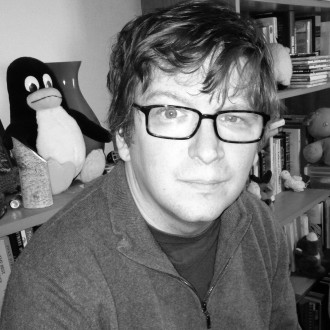 Guest host Ron Hogan helped create the literary Internet by launching Beatrice.com in 1995. He maintains an active presence in New York City’s literary scene, hosting and curating events that introduce readers to great writers, from Lady Jane’s Salon (the first monthly reading series dedicated to romance fiction) to the Author/Blogger series at Brooklyn’s Greenlight Bookstore. He’s also a contributing editor at Shelf Awareness, and has written book reviews and feature stories for publications like Tor.com, The Dallas Morning News, and The Daily Beast.

This event is presented in partnership with the International Affairs Forum in recognition of their 2014 focus on China that culminates in the region’s first Conference on China, “China Today: Competitor or Partner?” (June 5 & 6).