Ford Motor Company is central not only to the history and economic rise of Michigan, but to the transcendent narrative of this nation, and the world. Henry Ford’s $5 workday helped build the American middle class, and his B-24 bombers manufactured at Willow Run helped defeat Nazi Germany. 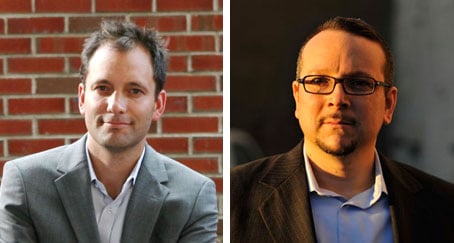 It was appropriate, then, that the National Writers Series opened its fifth season in Traverse City with a literary homage to Ford, the engine of America’s rise in the 20th century.

Taking the stage at the City Opera House on the evening of September 15 were three journalists who know that story well: guest host Jean Jennings, who co-founded Automobile Magazine and writes at JeanKnowsCars.com, and featured authors A.J. Baime (The Arsenal of Democracy, FDR, Detroit, and an epic quest to arm an America at war) and Bryce Hoffman (American Icon, Alan Mulally and the fight to save Ford Motor Company).

“Henry was the reason that the United States considered itself among the forefront of nations in this new age,” Jennings gushed. “The $5 workday was so important because it created the industrial middle class. It gave the first generation of black Americans the ability to send their kids to college.”

Baime’s and Hoffman’s books are both built around a dramatic comeback theme. In The Arsenal of Democracy, the United States was grossly unprepared to fight a world war as Hitler’s armies ravaged Europe. Henry Ford was a known anti-Semite who harbored sympathies for German industry, and he detested President Franklin Delano Roosevelt. But after the Pearl Harbor attack dragged America into the war, Ford redirected his assembly line to help the military effort. “Rosie the Riveter” and other working-class Americans (notably women and blacks) went to work at the Willow Run plant and built the bombers that would defeat the Luftwaffe.

“There was such a labor shortage during the war that they wanted to make use of any labor they could find,” Baime explained. “They hired dwarfs to work inside the wings of airplanes. They hired deaf, blind and legless people. They had people who showed up at the assembly line who had never worn shoes before. The labor shortage was so extreme that Ford sent buses throughout the South and brought people to Dearborn.”

Fast forward 65 years. The big three automakers (Ford, General Motors and Chrysler) were in the fight for their lives, and the Great Recession nearly shoved them into the grave. But Ford broke tradition and hired Alan Mulally, a CEO from outside the company.

“The epiphany was to bring in someone from outside the automobile industry,” Hoffman said. “From outside [the wealthy suburbs of Detroit] where the executives lived – Bloomfield Hills, Grosse Point, Naples, Florida …They’d only hang out with each other, party with each other.”

When Congress threw the automakers a bailout lifeline, Mulally surprised the entire nation by ignoring the offer, knowing full well that Ford only had enough cash in its coffers to keep the vehicle running for another five months. In so doing, Ford regained the respect of the American public, and pulled off one of the biggest comebacks in business history. Today, Ford is once again the most profitable automaker in America.

“When the recession happened, Ford was two years into its turnaround,” Hoffman said. “Most people looked at all three companies as one big stumbling dinosaur. But Alan felt like the only sober guy in a room full of drunks after he testified to Congress. The next day he went to his board and said, ‘what if we went to the American people and said that we won’t take the bailout?’ Ford knew that it was running out of money, and decided not to take the bailout.”

How dire was the iconic company’s situation? Ford had fired the subcontractor that watered the plants in its corporate office; it removed every other light bulb in the building, it stopped plowing the snow on its premises. But by the end of the week, 98 percent of the American public knew that Ford wouldn’t use its tax dollars to stay afloat.

At the City Opera House, and over dinner afterwards, guest host Jennings expressed amazement at the unfettered access that Hoffman, formerly an auto beat reporter at the Detroit News, had used to write American Icon. Hoffman knew the idiosyncrasies and ideologies of nearly everyone in Ford’s inner circle. And they trusted him to tell their story.

Beginning in 2005, as the signs of the economic crash began to materialize, Hoffman knew he was going to write the book. “I was chronicling it and was keeping track of events that couldn’t be told in a daily newspaper,” he said. “It took only one interview to realize that much of the real story (of Ford’s near crash and rebound) had been hidden from the press.”

In 2010, once Ford Motor Company had turned the corner and saved itself, Hoffman approached Bill Ford and betrayed his intention to write the book. “I’d like you to cooperate; I’d like access to company records,” he told the executive. “You know how it ends, it’s going to be a positive story. Let me tell the truth.”

The event was sponsored by: 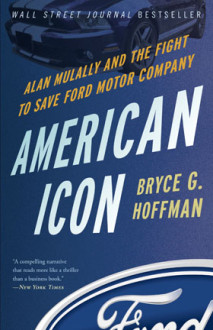 Bryce Hoffman is a bestselling author, speaker and consultant. An award-winning journalist, he spent two decades covering major companies in the automotive, technology and biotechnology industries.

At the end of 2008 Ford Motor Company was in the fight of its life but when Congress threw it a taxpayer lifeline, Ford ignored it. Instead, the iconic company under the leadership of Alan Mulally pulled off one of the biggest comebacks in business history. It would become one of the great management narratives of our time.  While the rest of Detroit collapsed, Ford went from the brink of bankruptcy to being the most profitable automaker in the world.

From his front row seat as the Ford beat reporter for the Detroit News, Hoffman conducted hundreds of interviews and gleaned top-secret documents, memos and archives to craft compelling narrative nonfiction that reads like a high stakes drama. American Icon: Alan Mulally and the Fight to Save Ford Motor Company has become a manual for CEOs and a guide for organizations that want to transform their cultures and build winning teams. 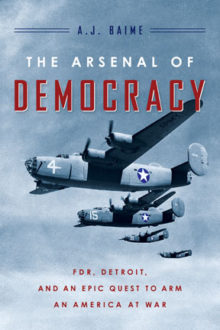 A.J. Baime is a regular contributor to the Wall Street Journal and an editor-at-large at Playboy. In his latest book Arsenal of Democracy: FDR, Detroit, and an Epic Quest to Arm an America at War, the Ford Motor Company and its production of the B-24 Liberator heavy bomber take center stage. He focuses on Ford’s B-24 bomber plant outside Detroit in Willow Run, where for the first time engineers attempted to mass-produce airplanes the way they did cars. It’s an engrossing story that Baime described as an opportunity to “tell a rich story about the most important collective achievement of any city in the nation’s history, and that’s Detroit during World War II.”

Baime’s first book Go Like Hell: Ford, Ferrari, and their Battle for Speed and Glory at Le Mans, is currently in development for a major motion picture by 20th Century Fox, starring Tom Cruise and Brad Pitt.

About Guest Host Jean Jennings
Jean Jennings has been writing about the car business for 30 years. She’s also been a cab owner/operator, a test driver, welder, and mechanic. She was a writer at Car and Driver and established Automobile Magazine with David E. Davis, Jr. Jennings was the magazine’s first Executive Editor, became Editor in Chief in 2000, and added the title of President of Automobile Magazine in 2006.

Jennings has made appearances on The Tonight Show with Jay Leno and Oprah. She’s a regular on-air contributor to Fox Business Network; CNBC’s Closing Bell, Squawk Box, Behind the Wheel, and Power Lunch; MSNBC; CBS This Morning and Evening News; and CNN’s American Morning and Headline News. Jennings has won awards for feature writing, car reviews, and my monthly Automobile Magazine column, “Vile Gossip,” including the 2007 Ken Purdy Award for Excellence in Automotive Journalism. Read what Jean is up to on her website JeanKnowsCars.com