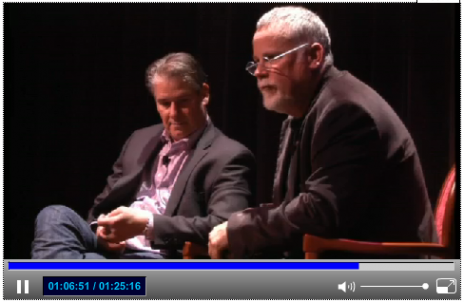 Event Recap
“You write what you want to read and have to be confident there will be someone else out there who will want to read it,” crime novelist Michael Connelly told a packed crowd at the Traverse City Opera House on Thursday, November 29.

Connelly certainly seems to have discovered the formula to producing content that other people want to read, with over 45 million copies of his novels sold worldwide. Connelly said he always likes to pick at least one place he has never been before for every book tour and Traverse City was that stop the tour for his his new novel, “The Black Box.” “The Black Box” is the 18th novel in the critically acclaimed and commercially successful Harry Bosch series.

Bryan Gruley, author of the critically acclaimed Starvation Lake trilogy and 2010 NWS Guest Author, guest hosted the event.  Gruley began the event by reading the first paragraph of the first Harry Bosch novel, The Black Echo, which sees the tattooed, jazz-loving detective protagonist “alone in the black” of a dark tunnel.

Writing a crime series was a natural step for Connelly, who spent 12 years a crime beat reporter. It is those experiences, Connelly said, that most actively influence his writing.

“I keep the momentum going by writing about things I know,” Connelly said. “I go and take the trail that Harry Bosch will take, see everything I can see and then go write about it. The details are always real.”

Connelly said his only regret was not getting published until he was 36 years old. “I became a journalist to get to this end. [But] being a journalist took me away from writing. I’m always wishing I had started earlier.”

He also joked about how he had a “three strikes and you’re out” agreement with his wife. He wrote two books that never got published, but then third novel he wrote was “The Black Echo.”

Now, 20 years after he published that first novel, Connelly’s status as one of the premiere crime novelists has earned him many awards including the Edgar, Anthony and Grand Prix Awards, and such fans as President Bill Clinton, who was photographed holding a copy of the third Bosch novel, The Concrete Blonde.

Connelly did discuss that although Bosch is as popular as ever, he has given himself a finite number of years more of writing books about the detective. Even two decades later, he stated that he still believes that opening paragraph of Bosch alone in the dark is emblematic of the series as a whole and that he sees the series ending with Bosch coming out of that of that metaphorical dark tunnel.

The National Writers Series would like to thank Michael Connelly and Bryan Gruley for an insightful and entertaining end to our 2012 season! 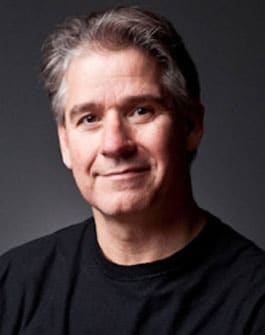 
We’re thrilled to welcome Bryan Gruley, author of the critically acclaimed Starvation Lake Trilogy (set in Northern Michigan). His 2009 debut novel, Starvation Lake, won coveted Strand, Anthony and Barry awards. He was also nominated for an Edgar Award for Best First Novel by the Mystery Writers of America. Bryan’s 2010, The Hanging Tree, and his 2012, The Skeleton Box, received rave reviews from a growing nation of fans.