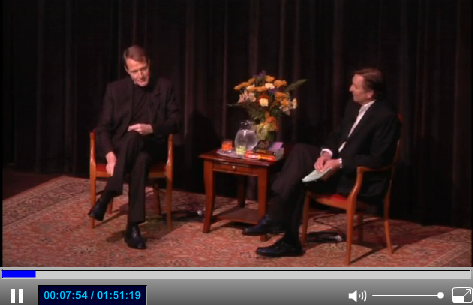 A Yankee fan, Child boldly stated that “baseball starts to get boring in the fourth inning.” He also shared a heartfelt explanation of what it was like to be a New Yorker following the attacks on the World Trade Center. He suggested that a World Series win for the Yankees in 2001 would have made things a little bit easier. “It was perfect fiction,” he said. But the Yankees didn’t win. Child told the audience that with that loss he temporarily lost his faith in fiction. “It was almost the end of Jack Reacher.”

The Opera House was filled with equal parts men and women, and Child explained that while Reacher has many male fans, the character has an essential trait that women connect with: “They both can’t stand injustice.”

During the audience Q&A, Child did not hold back. When asked about the ending to his book 61 Hours” he admitted “that [it] might have been a mistake.” And when one person finally posed the question that the entire room wanted to ask — what he thought about Tom Cruise playing Jack Reacher — Child was unabashed in his reply: “It was a great choice.”

Earlier in the day, he visited the newly-opened Front Street Writers Studio, teaching a master class to twenty-five eleventh and twelfth grade students from area high schools. He took the room by surprise when asked about revision. “Don’t do it, he said. “Do it once and do it right.” Child shared that the first sentences of his debut novel Killing Floor were unchanged from his first draft and were the first sentences of fiction he ever wrote.

Thank you, Lee Child, for your generosity with these students, and for a fascinating National Writers Series conversation.