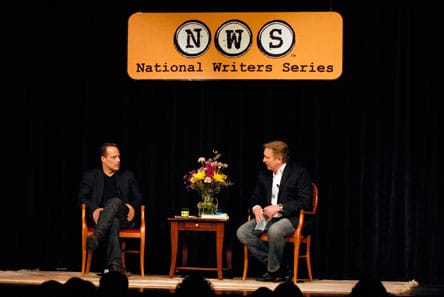 Listen: An Evening with Sebastian Junger

Join acclaimed journalist and bestselling author Sebastian Junger along with NWS host Doug Stanton for a revealing look at Junger’s life and work. The evening will also include an audience Q&A and post-event reception.

Sebastian Junger is an internationally acclaimed journalist, best-selling author and Oscar-nominated documentary filmmaker. His book The Perfect Storm: A True Story of Men Against the Sea earned him the nickname “the next Hemingway” and was adapted into a hit Warner Brothers film starring George Clooney. A contributing editor at Vanity Fair, Junger has won the National Magazine Award and the Dupont-Columbia Award for broadcast journalism, and received critical acclaim for nonfiction books A Death in Belmont and War. In 2010, Junger and photographer Tim Hetherington won the Grand Jury Prize at the Sundance Film Festival for their documentary Restrepo, a film about the conflict in Afghanistan that went on to win an Oscar nomination for best documentary in 2011.