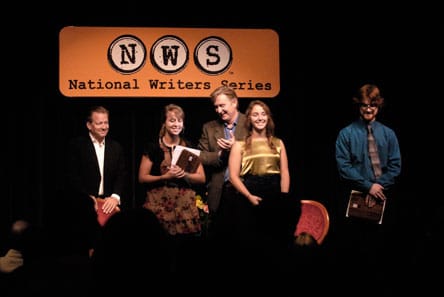 James Bradley was joined onstage by National Writers Series founder and New York Times best-selling author Doug Stanton for a lively and entertaining conversation about Bradley’s books, work and life, as well as an interactive audience Q&A. In addition, there was a special reading from the student winners of this year’s National Writers Series Scholarship Fund. Bradley personally presented the winners with an award recognizing their achievements. The evening concluded with a book signing with the author.

James Bradley is the celebrated author of #1 New York Times best-seller “Flags of Our Fathers,” adapted into a critically acclaimed film directed by Clint Eastwood. The book is the true story of the six men, including Bradley’s father, who raised the flag in 1945 on Iwo Jima, an image made iconic in the most reproduced photograph in history. Stephen Ambrose called the book “the best battle book I ever read,” and Bookpage declared it “a book that should be read by everyone who has even the slightest interest in World War II: it is the best of its kind.” A popular keynote speaker, Bradley is also a renowned scholar and historian. In addition to “Flags of Our Fathers,” the author has also published two New York Times best-sellers: “Flyboys,” a harrowing true story of nine American airmen shot down in the Pacific, and “The Imperial Cruise,” an exploration of Theodore Roosevelt’s foreign policy. Bradley currently resides in New York.