The National Writers Series is launching a recurring online column entitled Writers on Writing. The column will feature professional and working authors talking about the craft of writing. Our good friend, writer Michael Delp, is the first author featured in this column. He will offer up recurring gems of advice for writers, both established and aspiring.

A TIP FOR WRITERS #1
by Mike Delp
No such thing to me as writerʼs block, only writerʼs lack of attention. So, when things wane a bit, I sit down and read a favorite writer, say Jim Harrison. As I read, I jot notes to Jim in the margins and then a few days later, I go back to these notes and use them as the starts of poems and essays. I think part of the importance of doing this is physically writing in the margins and then going back later to see what I thought. Sneaking up on yourself, in a way. Letting things fester and surge a bit in that other place, literally a book. 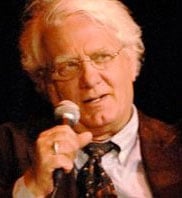 About Michael Delp
Michael Delp was an instructor of creative writing at the Interlochen Center for the Arts in Michigan. Delp’s literary works have been recognized and highlighted at Wayne State University in their Made in Michigan Series. He is known for writing about nature, especially fishing and water. His published works include:
As If We Were Prey (2010)
Contemporary Michigan Poetry: Poems from the Third Coast (1988) – Co-editor with Conrad Hilberry and Herbert Scott
The Last Good Water: Prose and Poetry, 1988-2003 (2003)
New Poems from the Third Coast: Contemporary Michigan Poetry (2001) – Co-editor with Conrad Hilberry and Josie Kearns
The Coast of Nowhere: Meditations on Rivers, Lakes, and Streams (1998)
Over the Graves of Horses (1988)
Under the Influence of Water: Poems, Essays, and Stories (1992)