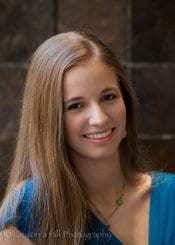 Remember that creative kid in elementary school? Every class had theirs: that one kid who could fill every possible inch with writing, and still go on to another sheet of paper. Northern Michigan-based author Brooke Shaffer remembers, because she was that kid. In fact, she can’t recall a time in her life when she wasn’t writing. She finished her first full-length manuscript as a middle-schooler, though it never saw formal publication, and continued to spin stories – sometimes as incomplete as a concept or a chapter – throughout secondary school. And even though most of those stories never saw the light of day, Shaffer’s efforts were not for naught. Her debut publication, Time to Kill, the first installment of a lengthy series entitled, The Timekeeper Chronicles, hit bookstores shelves in July of last year. Since then, Shaffer’s already cranked out two more novels; Tick Tock, in March, and Windup, her third novel, was just released in hardcover early last month. And with an ambitious fifteen-volume outcome in mind, Shaffer’s not showing any signs of slowing down.
According to Shaffer, The Timekeeper Chronicles has been a long time coming. Ironically, the turnkey that set her pen aflame was not the presence of time, but rather, the lack thereof. Says Shaffer, “I have this weird thing about time: I see it as a river, and [as it moves along], [all of the events that take place within it] are rocks and reeds. The summer before I turned twenty-one, I worked at a children’s camp as a nurse, and when I was there, I couldn’t see time anymore – basically, it got up to the camp, and then it ended. I [actually ended up going] home [because I was so bothered by it]. And while I was at home and feeling bad that I had to leave this camp, I kept thinking [what I could have done] if I’d had more time. So, I started there. I knew some things that I wanted to have happen and then I just kind of filled in the rest.” 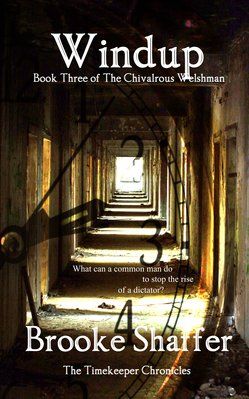 Rather fittingly, The Timekeeper Chronicles is the reflection of a lifetime. Shaffer’s lifetime, that is. In it, she’s has managed to immortalize nearly a decade’s worth of daydreams, ponderances, and plotlines, some even dating back to high school. She explains, “I have starting points from many years ago, and even if the story I was drafting at the time never came to fruition, I’ll still use the names and the places. When I started writing Timekeeper, I just kind of went back through some of the old drafts, picking out what I liked, and reforming it.” It makes sense, then, that the Chronicles as a whole have no singular inspiration, but many. The setting, however, was a different sort of beast. Says Shaffer, “The setting is in Charleston, West Virginia, and my husband and I actually stopped there for a few days on our honeymoon. There was also a movie that we watched years later, called The Last Sin Eater, which was set in the Appalachians. So, I had taken a few names and basic things from [the original] draft, and now I had this reference, and my own experience in West Virginia. That became a starting point.”
And so, the saga began. Spoilers be damned, Shaffer classifies her series as veritably sci-fi, but with a slightly less “fanciful” twist. In her characteristic matter-of-factness, Shaffer summarizes her series so far, with the most recent book, Windup, as “a murder mystery that devolves into a stand-off with police, running around on an alien world naked, and an intergalactic court trial.” The eventual collection, however, is designed to become multiple series set against the backdrop of the same fantastical world, with the series into which her three current novels fall, entitled The Chivalrous Welshman, as the backbone. From there, she’s envisioned multiple, self-contained mini-series to be read in that context. Already neck-deep in book nine, Shaffer maintains that her world of Timekeeping simply grew as she wrote: “I started out initially just writing The Chivalrous Welshman. Originally, it was [going to be] sixteen books, but I cut off the last one. As I started writing through that, I realized that a lot of the depth and backstory I was giving other characters, though they fit just fine in the backbone, would be awesome to explore further; that there was more to the story there.”
In contrast to her countless other endeavors, The Timekeeper Chronicles demanded to be written: “Starting The Timekeeper Chronicles was first time that I ever actually felt like ‘this must get out there,’ [about something I had written]. Timekeeper was one that I actually had to push for. So, I [pursued] traditional publishing [at first], but [everywhere I went, [publishers] kept saying, ‘It’s great, but it’s not for us.’ Finally, my husband said, ‘You know, if you feel that strongly about it, do it yourself.’” So, on top of being published, Shaffer became a publisher, too. “It’s actually really easy to self-publish,” she explains. “You can go on Amazon, for instance, input your information, upload a manuscript, and you’re done. But I didn’t want to be seen as a cheater. So, I went through and got a business license through the state, basically started my own business. I pretty much do everything as the business, and not necessarily as me. From there, I can do everything myself.”
Shaffer is certainly no stranger to dancing on her own, but creating a new universe is no easy feat. When she needs a little insight, Shaffer calls in the experts: “My biggest inspiration for the Chronicles’ structure would be Ted Dekker,” says Shaffer. “As far as the fun and the intrigue, I’d say Jim Butcher [of The Dresden Files fame].” There’s also a lot of historical inspiration [in my writing],” she continues. “If I’m reading historical fiction, I like to go back and research what actually happened. So, when I’m writing, sometimes I’ll go back, read a chapter, and realize I’ve taken inspiration from something in history.” But while Shaffer’s content is composite, her method is entirely singular: “If I’m really excited, usually I’ll just kind of open up the program and start writing, and once my creativity slows down, I have everything organized in neat little folders with the books and chapters and scenes. Depending on how much I know has to happen, or what I want to happen, I might just outline the rest of the book, and fill it in later when I’m feeling productive, or I might just be a few chapters ahead. For each book, I have how I want it to start, how I want it to end, and any major things that I want to have happen.”
For the cumulative chronicle Shaffer has planned, that sounds like an awful lot of folders. But, in contrast to her ever-growing sci-fi schema, Shaffer is starkly realistic in her approach to the professional writing industry. “Don’t stop reading,” she says. “Don’t stop writing, and don’t discount other mediums. There’s a lot of value in watching movies and watching theater, as far as [character] interaction and scene structure.” Her thoughts on self-publishing? Though it’s a process she’s ultimately come to enjoy, Shaffer unabashedly describes the initial steps as “a pain in the butt.”  “Don’t quit your day job,” she continues. “If you’re self-publishing, definitely don’t quit your day job.” While her head might be afloat in an alien landscape, Brooke Shaffer’s feet are solidly on the ground; and it’s precisely that sense of balance that makes her otherwise otherworldly cast so unquestionably human: “I’d like to say that [the books] were divinely inspired,” she says, “but as far as the semantics of it, I think it was just the actual relatability of the characters. Because I am every character.” We know just what she means. On second thought, maybe we’ll take an extra sheet of paper, too.
Anna Faller is a freelance writer based in Traverse City, Michigan. She can be reached at: afaller@umich.edu.